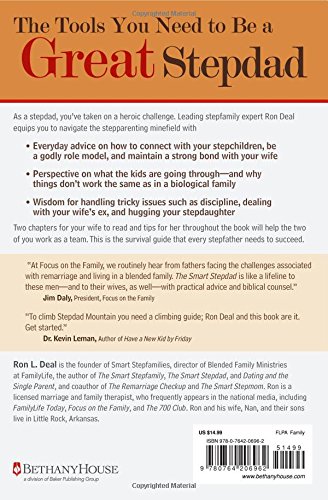 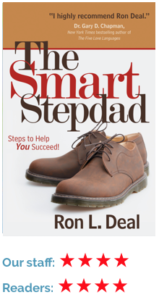 First off, kudos to the writer for writing a book just for stepdads. Even better, the author does a very nice job in addressing stepparenting issues unique to step fathers. And as always, Ron Deal gives us a nicely formatted book, broken up into bite-sized sections and visually appealing with shaded text boxes, quotes and lists.

His chapter titles are clever and show good stuff is in store for us. Some include: "Stepdad: Hero or Hostile Takeover?" "Sex Stuff: Did You Marry a Wife (Sex Partner) or a Mother (Business Partner)?" "Getting the Socks Picked Up: Parenting101," and "Hugging Your Stepdaughter, Stepsibling Attractions, and the Awkward Issues of Stepfamily Sexuality." (More on this chapter later.)

The advice throughout this book is blunt, insightful and helpful. I tend to judge a book by the number of takeaways I get from it, and from this book I got several. My favorite section was "Five Principles of Effective Discipline." He talks about how discipline should be rooted in love -where you help children find their unique strengths, not those you wish they had, to let reality be the teacher (let some natural consequences occur), talk less and act more (parents tend to talk too much), and to "catch" your kids doing something right.

Also excellent was the chapter about who did you marry - a sex partner or a business partner? He writes, "I wish I had a nickel for every time I heard a stepdad say that before marriage he thought his girlfriend was all about him (a bit narcissistic, I know), but after the wedding he felt duped - that she jumped ship and became more of a mother than a wife." Deal does a nice job of showing many stepdads' thoughts and gives tips on how to have reasonable expectations and make things work.

I have one final high compliment to give, and also a criticism, both on the same exact subject, that of stepfamily sexuality. This is an issue often ignored as it is unpleasant and awkward to discuss. It is much easier to ignore and pretend the problem does not exist. Accordingly, I was so happy to see a tough topic discussed - one with potential dangerous consequences if ignored.

It is common sense that bringing non-related teenagers and pre-teens of the opposite sex into close and intimate living conditions has a natural potential for complications. But sadly that can sometimes extend to stepdads with the sudden appearance of a seventeen year old girl in his house, or the same with a stepmom and the teenage stepson. What I found disappointing, however, was that when addressing this issue, it felt minimized and I thought the author had a chance to do something really helpful for people in this situation.

For example, in the "Passing Thoughts" subchapter on a stepfather's unwelcome thoughts, he writes, "You don't have to be a pervert to experience an uncomfortable feeling when giving a hug to your stepdaughter when no one else is in the room, or to have passing sexual thoughts about her . . ." and later, "Sean is aware of his vulnerability and is striving to manage it appropriately." Later, there is a footnote with the following: "Clearly, a man who sexually touches a stepchild is being abusive. This must be reported to the authorities and he must seek treatment. A man who has repetitive sexual thoughts about a child - even if he has not acted on them - should seek psychological treatment as well."

Let's say you are a stepdad reading the book, and you are a man who has those improper thoughts. This is an ideal time to help that person, and more importantly, the child who could be affected or victimized by his thoughts or actions. But I could possibly see a reader skipping over the footnote entirely. Do most people actually read footnotes? Or maybe he sees it but convinces himself the problem must not be that severe if it is relegated to a mere footnote.

There is a big difference between a stepdad recognizing that his teenage stepdaughter is a beautiful young woman, and something else entirely to have sexual fantasies about her. This chapter would be an ideal time to speak to him in blunt terms about what is unhealthy about such thoughts and the need for immediate counseling, and do so with a big bold subheading, as the author did with more than a hundred other topics, to show the reader it's an important topic.

Going outside the book itself for a moment, perhaps part of the problem is that society has a double standard on this issue. For example, some in society sadly see a teenage girl being ogled and objectified by an adult male as “understandable.” But if we change the author's example of a stepdad having sexual feelings for his stepdaughter, to a stepmom for her stepson, would some people feel differently? Or what about a stepdad's fantasy for his stepson, or a stepmom for her stepdaughter? The point is that any time an adult is fantasizing sexually about their stepchild, it is a cause for real concern. The key issue is not the gender of the parent or the child, just that one party is a child, vulnerable to the adult.

Ron L. Deal is one of the best and most successful writers on the subject of step parenting, so I'd love to see him address the importance of this topic as I know he'd do an excellent job with it. I know authors frequently revise and update their books, so I hope he will do in this one small area as in my mind it diminishes what is otherwise an excellent book.

None (but see other author reviews on the back cover).